Reality Trees again (link). This time for the human condition of being wrong about something and staying wrong. Wrong-headedness, is the correct English, I’m told, though that may or may not have an apostrophe in it.

For the purposes of this conversation, I am quite prepared to be wrong, and am comfortable with objective feedback towards that. I would imagine that the thing I have would be better for more brains added to it, and 100 more iterations. There’s a risk that it ends up bigger than something that can’t be printed on A4 / US Letter. 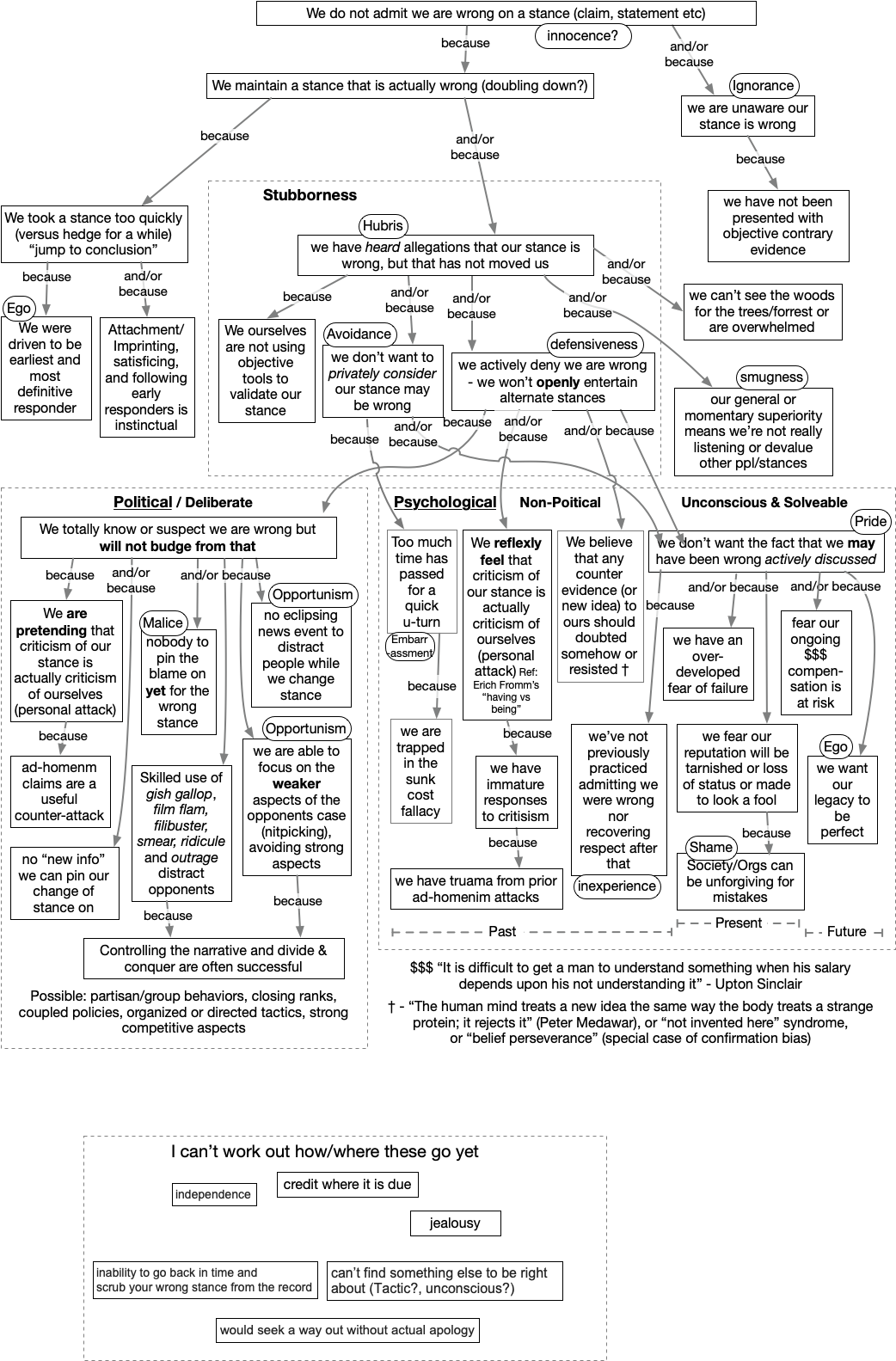 “We” could easily be I, you, he, she, xe, they. At least in this CRT that’s the phrasing for now.

“Stance” could easily be “claim”, “statement”, etc. I’m open to “even better if” suggestions there. Actually for any aspect of this.

In a reality tree, every two pairings (coined by ‘because’) should stand on their own in a sentence formation:

You would not leave the diagram in this style if you were a team trying to find an improvement to experiment with. You might claim “lets try running indoors” as an experiment and see how the CRT changes a week later. Some of your team might say “lets try running in rain-wear”, but the gang says we should try that next week if the first experiment doesn’t pay off. Specifically does the reality tree change after the experiment?

Obviously, this one is all mired in psychology, politics, and human behavior. The diagram is not a tool for solving something. For me though, I think I am going to practice admitting I am wrong. I might also contrive some things to be wrong about, though I should disclose the experiment to the other person. There are pitfalls to practicing being wrong: smugness could sneak back in. Will this help me be less wrong in the future, or not wed myself to an incorrect stance/claim/position/statement for more than the minimal amount of time? I hope so.

If you’re in a company and all aligned on goals, there is an implicit constraint to NOT use things from political group with colleagues. I can’t recall it ever being explicit in a company I worked for, but there’s no reason why it could not be. You’d probably manage someone out if that were a habit. From the psychological group, you’d want people to work on it. Most likely everyone butts into one or more these frequently - self and as we analyse others.

If you’re in politics as a profession (not business), there’s an expectation that you’re good at the political defenses of wrong positions on topics, and good enough and convincing the voting population that you’re correct somehow.

For some time I’ve been thinking about the WHO’s unwillingness to accept that COVID-19 is airborne. Specifically more transmissions happen because virons are passing between people in aerosols. More infections that way than droplets entering an orifice after being exhaled/coughed/sneezed (that would otherwise hit the floor). More so too, than via fomties (person smears somebody else’s liquids on surfaces into their own mouth/nose/eyes).

Wrong for over a year now:

FACT: #COVID19 is NOT airborne.

The #coronavirus is mainly transmitted through droplets generated when an infected person coughs, sneezes or speaks.

To protect yourself:
-keep 1m distance from others
-disinfect surfaces frequently
-wash/rub your 👐
-avoid touching your 👀👃👄 pic.twitter.com/fpkcpHAJx7