Here’s something I’ve previously drawn up (and now massively anonymized). I’m graphical and always need this type of thing for new clients. It gives me a view of production from a system/process/container point of view. This one is a pre-cloud implementation for the group I previously consulted with (who are fully in the cloud now). UAT was similar enough but had a reduced hardware allocation. Not only smaller specced units but less horizontal scaling. UAT was also stymied by the partners and clients sometimes not having a UAT environment of their own for “us” to connect to. Or one that was crap in terms of robustness. The client did not have a QA environment (back then). 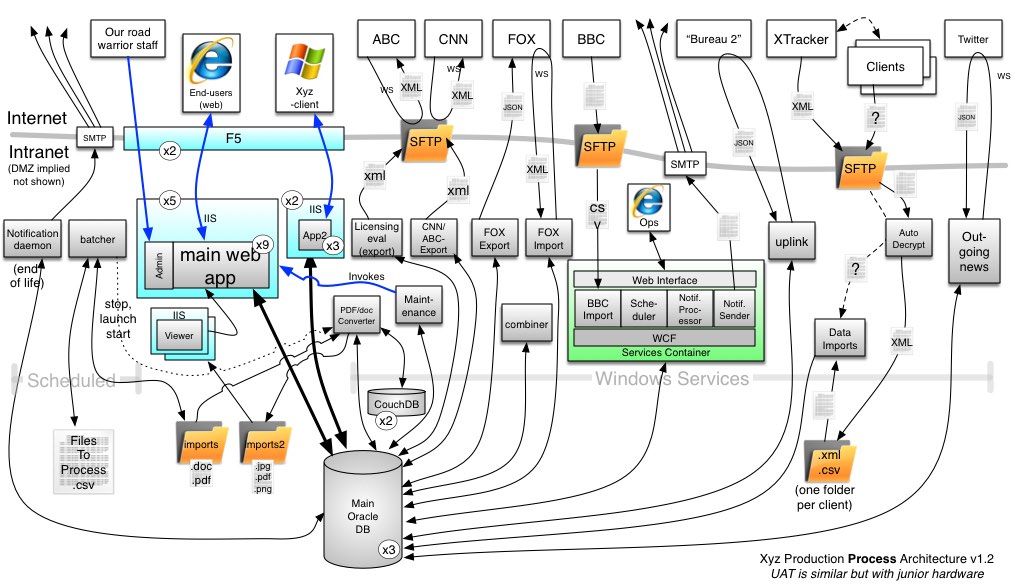 Boxes are at least processes. Lines are TCP/IP or file I/O. Numbers in circles are indications of horizontal scaling or duplication on some basis.

Typically, these diagrams are the result of many conversations. I’ll exhaust Person A, with questions (and use a large sheet of paper). Get that into OmniGraffle then go back to them. “Is this a right”, I’ll ask, and at some point it is, so I’ll go to person B with a print out (a large sheet of paper again), and ask “what’s not quite right”. The diagram will morph a lot through the first three people. At some point, I stop printing and work directly in OmniGraffle because the mods are fewer. At some point it’s done and even Person A likes it (which always pleasantly surprises me).