So from Theory of Constraints, there’s an industry tool called Current Reality Tree (CRT). Eliyahu Goldratt devised this “focusing procedure”. In software development, you could be troubled as a team with a lack of throughput for the “machine” that you would wish to otherwise be Continuous Delivery (CD). Nine times out of ten, you have a gordian knot that is your “Continuous Integration” (CI) not actually continuous or particularly integrated. I’m not going to draw that picture for you as it differs for every team. Christ Hohmann goes into the creation of a CRT from scratch for a biz problem in this 17 min video.

Here is a CRT I made solo for the pandemic (backdated 11 months). It is on western responses to the pandemic as of that time, and only for the countries that were aiming for “flatten the curve”. It is far from final - making such things solo is not recomended.

The resulting diagram is best viewed on a laptop or desktop. Click/tap to zoom: 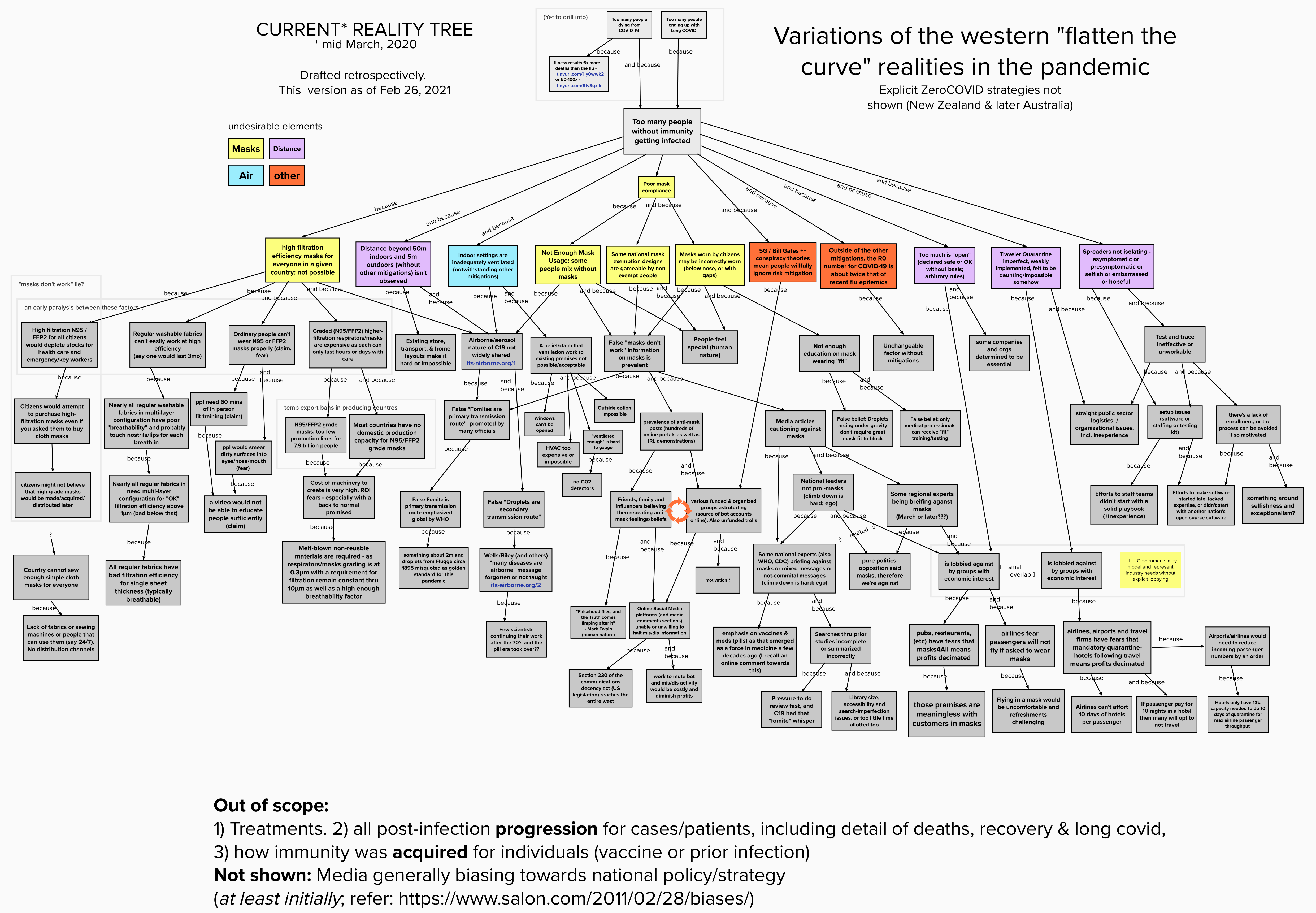 Links in the PNG:

Versus Chris’ video, my arrows go in the opposite (unconventional) direction. I turned those around given I am using the literal word “because” is on the chart instead of circles over lines which strikes me as wierd. Plus arrows will drive you to root causes. Or should, IMO.

I’ve used Mural.co to draw the CRT. I could have used OmniGraffle on the Mac to do that as it has more flexibility - despite it not having a template for CRTs. There are unexplored sections to what I’ve drawn up. It is also a layman’s view of what happened. I’ve no medical background, but I sure as heck lived through it (in a mask from one year back - making my own before supply ramped up).

So far it has been about six significant iterations. Done solo is not how you do these things. In the workplace to solve a problem, you’d do it on paper initially with a bunch of people in the room. Them being novices is not a problem, as they will get into the groove sooner or later. One hour then a break of a day is best. After that initial session, someone puts the paper scribblings (flipchart-sized, or whiteboard) into a diagramming tool. Thence after it is live edited in front of people. I think Mural would allow multiple people to edit at the same time (small glitches notwithstanding). On day two, you do another hour with additional tweaks. And so on.

You could have the same people for that or different ones. I’ve also done this one on one (as drafts) before: “hey Jane, Vipul helped me draw this up yesterday, can you review it with me and make suggestions?”. This is good for “we’re all busy” workplaces. Again, each person can get their initiation into CRTs as you sit with them, and maybe it’s only 20 mins per person which might match their attention span. If you’re a CTO you can fill a room for an hour - repeatedly. More often I’m a consultant and not a CTO though, so different approaches work better even if they take longer to complete.

I’ve used “because” and “and because” instead of the shapes the aficionados would use (see the wikipedia page). This is better for the uninitiated I think. Each “and because” could alternatively be an “or because”, but that’s just perfectionism. In the one I’ve drawn up here there is no single root cause represented. No one thing that you could fix to alleviate the problem. Of course, the bottleneck only ever moves somewhere else in these things. For biz/software problems you’d also use Value Stream Mapping (VSM). I learned both of these at the elbows of Kevin Behr and Jabe Bloom some years back and have been teaching and using them ever since. VSM is way faster to do - maybe only a couple of hours for a business/software process. The two are complementary.

Both CRTs and VSM are tools for solving problems. You might also have a diagrammatic representation of a system via a Pert Chart. At the start of the ’80s, this was taught in universities along with “critical path analysis”. Eli Goldratt innovated this some more as “critical chain analysis” at the end of the ’80s and published Critical_Chain in the mid ’90s. Of course, everyone should read his The Goal novel. All this is the knowledge space as “Lean” if you couldn’t guess.

Is what I’ve done for the pandemic useful? Probably not. Some academics, medical folks, and industry/biz people should get in a (zoom) room and start over. They should be careful to not have people in the room who made it worse for that prior period and who have not yet done their decent mea culpa.

What I could work out is the west made a mistake on masks at the start. Even medical science: Google search: ‘David Powell forget masks february 2020’ and Google search: ‘Dr Shunmay Yeung masks don’t work bbc march 2020’ (David Powell would later flip to pro-masks). Each country should have got all its citizens in cloth masks in March 2020 and kept that going for eighteen months. Each country should also have asked in-country garment and PPE makers to pivot to high-spec cloth masks (and disposable respirators) ASAP and offered R&D grants for that. Each country should have gone as far as possible towards “no exemptions” for that. The Airline industry might have been able to save itself. There’s a chance that if everyone was in masks with ongoing efforts to replace bad cloth masks with better cloth masks (and respirators) that the quarantine-hotels could have been avoided. In lieu of that “quarantine at home” with checks on that could have been effectve.

Hospitality and face-to-face business could have saved itself too with masks and more: Unlike 1918, the west was against ventilation changes - including classrooms outside? Maybe large 30-person canvas tents were not available in 2020 whereas they were in 1918. Canvs tents had large 2-inch (5cm) wooden poles and a right that could be as high up as 8 feet (2.5m). They could stay up for months at a time and stand up to rough treatment. Modern lightweight tents with aluminuium poles cannot. Pubs, bars and restuarants without the ability to setup outside might have been out of luck if wave one started. If all other measures worked and wave one was avoided, then bars are restuarants might have found a way to continue.

Vietnam and Taiwan were what the west should have been taking knowhow from. Snapshot from Financial Times graph tool 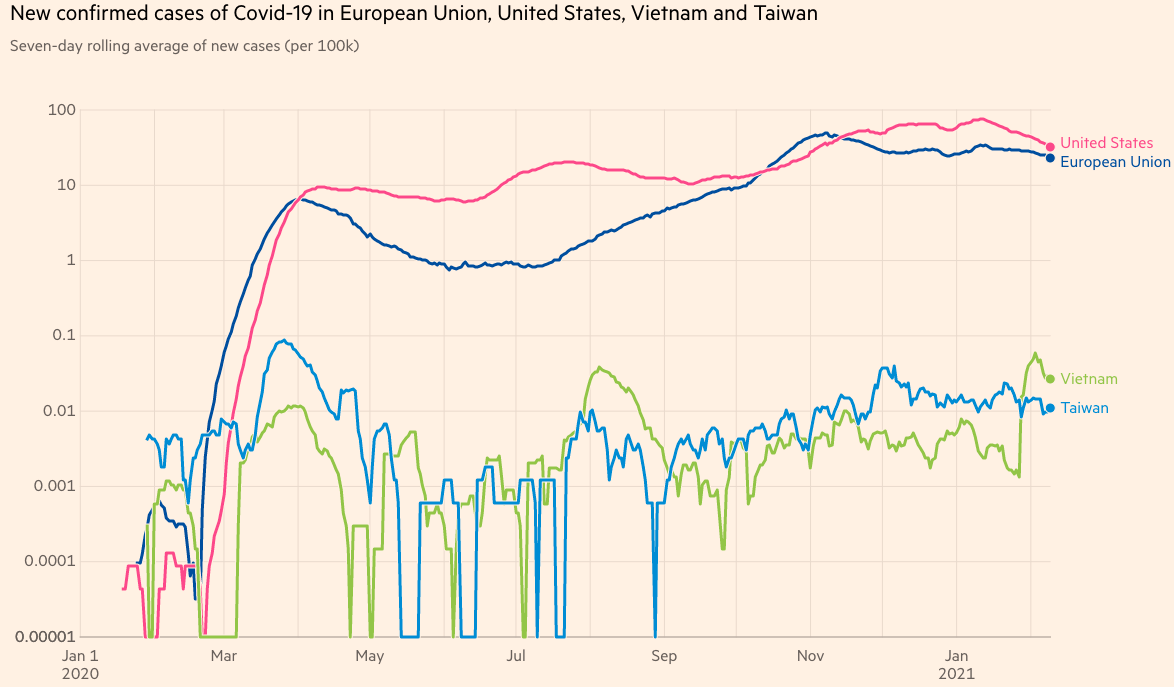 Not just those two countries, but they are stand out. New Zealand aced it from the outset (Zero-COVID strategy), but killed international air travel as they implemented quarantine hotels. Australia gets a prize too for getting from exponential growth to Zero-COVID mid-year through hard work (while some arguments raged between national and state governments).

Using CRT techniques, and resetting the clock back to March 2020, the choices a western countries had were:

Aiming at Zero-COVID was the cost effective move. More countries will choose to go to that status (with transition costs). As well as east/west and developing/developed bifurcated worlds, we could well also have COVID/zero-COVID worlds. That would come with quarantine’s between them and QR-code verifiable vaccine records for travellers already inside the zero-COVID world. Some countrius would transition in 2021, some in 2022. Some perhaps never.